Europe is playing for time in resisting pressure for a full embargo on imports of Russian oil and gas while speeding up efforts to reduce reliance on Russian energy imports.

The impact on public finances, businesses and households of the EU-Russia energy stand-off depends on how delicate a balance the EU strikes – with Germany among the leading opponents of more radical sanctions – between punishing Russia for the war in Ukraine and protecting economies from the full knock-on effects of sanctions and Russian government retaliation.

The immediate economic impact of an EU embargo of Russian oil and natural gas would be significantly higher levels of inflation and lower GDP than currently expected. Some countries would be worse hit than others due to their greater reliance on Russian gas imports, notably central, eastern European economies, including Hungary and Slovakia (see table below). Germany, while facing significantly slower-than-expected growth this year – has the advantage of its huge, diversified economy which can help limit the potential economic damage from being cut off from Russian gas supplies.

However, no European country is likely to evade the financial consequences of limits on, let alone a full embargo of Russian oil and gas. Households and businesses in France and the UK, largely independent of Russian energy imports, face rapidly rising cost pressures. This may result in additional significant spending near-term to cushion business and households from rising energy prices and longer term from reinvestment in nuclear energy, putting pressure on public finances already stretched by the pandemic.

A short-lived embargo of several weeks to a couple of months, would be manageable but costly, pressuring companies in more energy and hydrocarbon-intensive industries such as chemicals and metals to reduce or even suspend production.

The longer a possible embargo lasts, the more damaging will be the implications. Should a quantitative limit or even an embargo be agreed – possibly conditional on certain Russian policy outcomes – it could last several months, if not longer. Even in the absence of such an agreement, Russia’s demand to be paid in rouble for its gas is likely to result in a significant decrease of Russian gas supplies as it implies contract breaches, and in addition, would force EU policymakers to circumvent their own sanctions.

Governments and regulators will likely have to step in to maintain stability of Europe’s power and gas networks and ensure ongoing energy needs are met, possibly through stricter energy regulations. Some countries, including Germany, have already started to draw up detailed emergency plans to implement such measures next winter.

The more quickly Europe can cut its reliance on Russian oil and gas, the less painful an embargo becomes, but this is a question of months and years rather than weeks. Replacing Russian oil imports are less of a problem than natural gas. Crude is more easily sourced from other regions given international oil markets are more liquid than gas markets. Europe has relatively good oil import, transport and storage infrastructure.

The limitations of Europe’s existing network of gas pipelines make it challenging to find alternative sources for gas. Part of the shortfall could be met through higher liquified natural gas (LNG) imports, such as from the US and Qatar, and by tapping gas in storage and building up stocks ahead of the 2022-23 winter.

Reducing demand for gas will also be necessary. In some areas, such as electricity production, increased use of alternative energy sources and a temporary halt to phasing out some nuclear-powered and coal-fired electricity production is possible. Where industrial production processes or households rely on gas, any substitution by other energy sources may not be possible in the short run.

The EU’s ambitious REPowerEU plan to diversify gas supplies, accelerate the roll-out of renewable gases and replace gas in heating and power generation, aims to reduce demand for Russian gas by two thirds before the end of the year. However, it would not be until 2030 that the EU says it would no longer need Russia’s oil and gas. Relying more on nuclear power would be a long-term policy commitment given the long time it takes to build new reactors – and not every country in Europe is open to doing so.

We see intensifying EU efforts to diversify sources and suppliers of energy. Countries such as Italy and the Netherlands plan to ramp up offshore wind capacity. Belgium has allowed the extension of the lives of its nuclear reactors by 10 years. Germany is seeking alternative gas suppliers such as Qatar. Bulgaria, almost completely reliant on Russian gas with a 10-year deal with Russia’s state-controlled Gazprom expiring at end-2022, is accelerating projects to replace Russian gas, including the construction of a gas pipeline connected to a planned LNG terminal in Greece, due to be operational in 2023. These measures reflect just how high Russia’s war in Ukraine has driven energy security up the policy-making agenda in Europe. 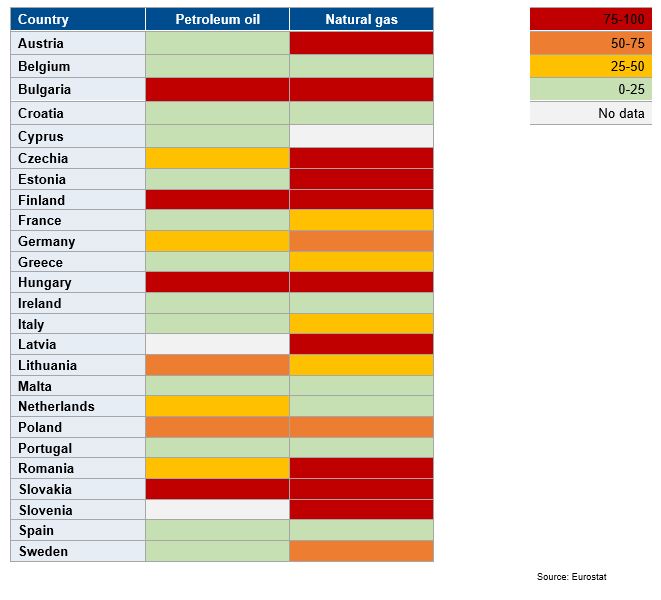 Scope takes no action on Slovakia

Webinar: Opportunities in energy infrastructure within ...